The Otterhound is a Vulnerable British native breed, with fewer than 30 puppies registered each year.

The Kendal & District Otterhounds in 1972 - photo by Jim Meads

The Otterhound is an ancient British breed of scent hound and the first record of otterhunting was during the reign of Henry II in the 1100s. The otter was classed as vermin and hunted not for sport, but to protect fish ponds which held food stocks, particularly around the monasteries. At this time a variety of hounds were used for the purpose.

The Otterhound as we know it today appeared sometime in the 1700s and books provide evidence that the rough-coated Otterhound was regarded as the 'classic' form of the breed by 1800.

As well as hunting through the centuries, Otterhounds from all the famous packs of the time were shown at early dog shows (the first recorded being at Leeds in 1861) and through into the early 1900s under Kennel Club rules. Eventually, in 1910, the Association of Masters of Otterhounds was formed and thereafter hounds were only shown on the flags at their show at Rugby.

In the early 1970s hunters reported a dramatic drop in the number of otters in our rivers. The Association commissioned a formal study which considered the conservation work necessary and came to the conclusion that the otter was at serious risk not only because of the changes in farming practice which destroyed their habitat, but because the wide use of chemicals on the land was a cause of death. It was decided that hunting should cease at the end of the 1977 season and in 1978 otterhunting was banned in England (Scotland followed two years later).

The Masters of the two remaining packs of pure-bred Otterhounds (the Dumfriesshire and the Kendal & District) got together with respected breeders and the Kennel Club came to the rescue of this ancient breed which was facing extinction. All remaining hounds of breeding age were registered with the KC and distributed to breeders anxious to save this wonderful old breed. 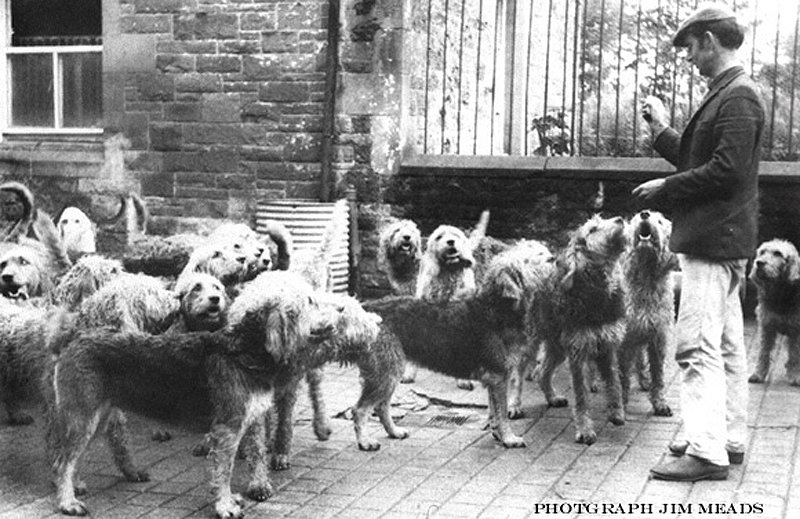 The Dumfriesshire Otterhounds in 1972 - photo by Jim Meads
Next
Previous